The heavens declare the glory of God; and the sky above proclaims his handiwork. (Psalm 19: 1-6) 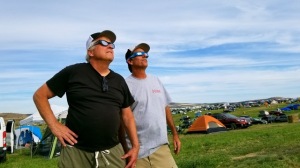 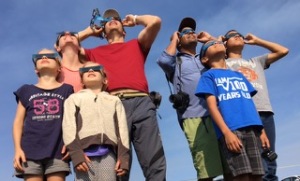 Nearly everyone was speechless when they looked through protective glasses and witnessed the total eclipse of the sun.  Some were in the total eclipse zone; most were just outside.  No matter where you were, there were “no words” to describe the feeling of being in darkness in the middle of day.  Television coverage recorded the gasps and the “oohs” and “awes” when the Corina appeared and then the diamond flashed momentarily.

On Monday, August 21, 2017, the heavens were on full display.   It got the attention of the world.  When the moon stood between the earth and the sun, the sky did all the talking.  We did all the observing.  It was a moment to wonder.   Here the moon, being smaller and much closer to earth, put the much larger sun, 93,000,000 miles away from earth, into complete darkness.

The full eclipse lasted just under two minutes, but the memory of being there . . . even on the edge . . . will last a lifetime.

The Brother Team Photograph the Eclipse – Bernie used a 200 mm Telephoto lens mounted on a tripod with all manual override settings and manually tracked the movement of the eclipse. Bernie’s cameras were entry level compared to what they saw all around them but he managed to squeeze every ounce out of its capabilities. The tripods came from the Goodwill and the rest is preparation and inspiration. The camera was a Sony A65 DSLR 270mm zoom.

Manfred encountered a glitch trying to duplicate the movement of the sun and keep the sun centered in the viewer. Unfortunately he did not hit record while flying his drone. The drone was only one of many recording devises; though a tragedy on Manfred’s part it ultimately did not diminish the overall experience, and his brother Bernie forgave him and encouraged him right away.

They End Up in Oregon – Bernie from California…Manfred from Washington State –Their goal initially was to get lost in the vast open spaces. When they got up after the first night, they discovered they inadvertently had set up next to an Indian burial ground. They didn’t feel right about that and neither did the authorities from the local tribe. They moved on and found the R+D Ranch by sheer luck.

The R+D Ranch was just north of Madras in Oregon. A fresh cut grass field made for a park like setting and the owners and staff of the R+D Ranch went all out to help make this a memorable experience with a family friendly environment. Some ranches had 5,000 visitors; R+D had only about 1,000 or so guests, but had the greatest amenities of them all. They provided all sorts of activities to pass the time till “Totality,” volley ball, horse shoes, water slides, eclipse hay rides, live entertainment, fire pit to roast marshmallows, and an assortment of venders selling everything from iced coffees to farm fresh pulled pork sandwiches. A large tent provided shade and seating and offered an opportunity to meet people from all over the world.

There was a vibe that can’t be compared to anything I know. You just need to experience it for yourself. I’m so glad we didn’t end up in one of the Solar Farms that packed them in like Sardines or on the side of the road with only few to share the experience with.

Sunset the night before the eclipse – bdseidler

The Wonder of it All – They had a great brother’s adventure. The months of planning paid off in spades, the equipment performed beyond their expectations, the good fortune of finding the wonderful R+D Ranch, strangers helping one another, unusual courtesy during the epic traffic jams and making terrific memorable memories as brothers. Just in their small corner of the camp site it was impossible to not find folks who came from all over the world…Denmark, Sweden, Japan, Germany, just to mention a few, and they all tried their hand at speaking English…they even ran into some Americans.

Location, Location, Location- Madras Oregon was the location of choice by NASA, scientists, the aviation community and about 50,000 of their “closest friends” who were the nicest people you would ever want to run into. Bernie was able to share his technical expertise with total strangers while total strangers took it upon themselves to fix outstanding meals for them…perhaps they looked the part of helpless travelers. By the way, Madras usually has only 15,000 occupants.

The Brothers Share Thoughts- The vast majority of people who saw only a partial eclipse (from 1% to 99%) wonder what all the hoopla is about making all the efforts and sacrifices to actually witness a totality. To describe totality to someone is as pointless or difficult as describing the Mona Lisa to a blind man or skydiving to someone who’s afraid of heights.

The responses vary from a pure scientific point of view; some work in a religious angle but just about everyone has an emotional reaction. There was an audible elation voiced by yelling, whooping it up, dancing, whistling, howling and the likes that transgendered all nationalities and cultures. They were witnessing something both beautiful and scary. The event itself is totally silent…the animals quieted down, the birds stopped singing, traffic on the roads stopped but there was noise all over, the humans voiced their approval through much jubilation.

For most humans it’s a once in a lifetime event that can’t be erased from memory banks by time…Bernie and Manfred are seriously looking into the next eclipse some 7 years out and starting in Texas.

Bernie’s Comment- A Big Thanks to my Brother “Manfred” for talking me into coming up here to experience the Eclipse, without him, it wouldn’t have happened. A month of prep and practice to make sure we capture the moment with our simple cameras, but most of all to take a moment and soak up the experience. My videos remind me of things I’ve missed while filming.  Manfred even flew his p4p during the eclipse, just hovering but saw the shadow move. What an experience.

It started at 9:06 and the Moon slowly covered the Sun and by 10:20 was completely behind it. The last part of the shadow came quickly. Manfred saw it coming from 400 ft. Totality lasted about 2 mins. It got dark in an interesting way and the temperature dropped 5 degrees. 360 sunset with dark blue sky straight up. I’m sure I saw a planet and few stars. Then the Diamond Ring appears and light follows within seconds. It was over that fast. Wow many times.

Hope you enjoyed my perspective of the Eclipse that was shared by millions. Canada to Mexico saw some part of the Eclipse. How amazing was this???? Words cannot describe.

Christine Elizabeth Robinson lives in southern California where the skies are sunny and the Pacific Ocean sparkles every day. Since 2013, she’s been a retired nurse practitioner turned writer, ever grateful for blog followers of her website, Before Sundown. In 2019, she started writing a historical fiction book, and by the summer of 2021 Three Years of Her Life is in the self-publishing process, nearly ready to launch. http://cerobinsonauthor.com
View all posts by C.E.Robinson →
This entry was posted in My Blog, My Entries and tagged 2017 Eclipse, Madras Oregon, R+D Ranch, Seidler Brothers Manfred & Bernie, Shared by millions, The Wow Factor, Totality, Words cannot describe, YouTube Videos. Bookmark the permalink.

22 Responses to The Seidler Brothers 2017 Eclipse