*This Book Bundle contains the first 3 volumes of the LEGENDS OF WINDEMERE fantasy series.* 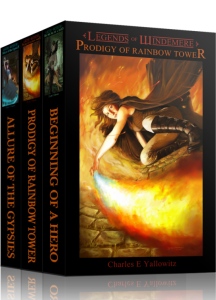 Charles E. Yallowitz was born, raised, and educated in New York. Then he spent a few years in Florida, realized his fear of alligators, and moved back to the Empire State. When he isn’t working hard on his epic fantasy stories, Charles can be found cooking or going on whatever adventure his son has planned for the day. ‘Legends of Windemere’ is his first series, but it certainly won’t be his last.

Every hero must take that first courageous step into adventure. For Luke Callindor, it’s more of a blind stumble. From battling a demonic assassin to facing the family he left behind, this warrior’s adventuring career has been one awkward mistake after another. Most days the only things that keep him alive, yet never unharmed, are his trusted friends and his reckless courage. How long can his luck hold out before the gods of Windemere decide to cut his legend short?

That’s right.  Guess who just released a book bundle that includes the following:

If you wanted to get into LEGENDS OF WINDEMERE, but feel like it’ll be pricey to catch up then grab this 3-in-1 bundle.  Start off with Luke Callindor in Hamilton Military Academy and face the Hellfire Elf.  Meet Nyx and travel down the L’dandrin River where many dangers await.  Then finish off with a visit to Luke’s hometown where an orphaned gypsy and zombie army are waiting to greet him.

So escape reality for a while and catch this fun series from the very first swing of Luke’s sabers.

I'm a retired nurse practitioner as of 2013, and a full time novel writer since then. I added blogger in 2014 and started the blog site Before Sundown remember what made you smile. From the beginning, I was overjoyed that Before Sundown was honored with awards, and blog tours. It kept me connected to dedicated worldwide followers, and I'm grateful for their likes, comments and reblogs of my posts. I write posts to support fellow bloggers, friends and family--their books, interests, professions and travels. Overtime, I've added excerpts from WIPs as a co-author, and a final version (2021) of the first three pages of my book, Sunset Inn - a secret keeper's tale Next, on to publishing and then maybe a screenplay. The collections of sunsets/sunrises on the Welcome page came from blogger friends all over the world. I wanted visitors to remember what made them smile Before Sundown. What better way than to offer them breathtaking sunsets or sunrises? http://cerobinsonauthor.com
View all posts by C.E.Robinson →
This entry was posted in My Blog, My Entries and tagged Charles E Yallowitz, Epic fantasy, High fantasy, Legends of Windemere, Sword and Sorcery Fantasy. Bookmark the permalink.