In 1945, the population of Lovell, Maine was around 650. In this small lumber town, the people were busy, preoccupied with hard work to pick up their livelihood after WWII ended. The kids went to school, had down-home fun and outdoor adventures all year round. Technology was limited to radios, rotary telephones and movie pictures 15 miles away in another town. Everyone knew everyone who lived there and kids called close friends and neighbors’ aunt and uncle as naturally as they did their real aunts and uncles.  That’s how close-knit people were in this small town.

That old saying is true; three little girls can not play together. My sister, Marlene and Martha were best friends, even though Martha was my age, five-years-old, that didn’t count. I was the third girl left out. Except, every so often Marlene announced what I could do next with the two of them, “OK, Chris…tine, you can play in the piano box house with us, even though it’s tight inside.”

Of course Marlene denied any of this and thought she included me in everything without announcements, and she was always a good, big sister, a year and four months older than me.  Well, yes and no. When the chips were down and I was on the edge of trouble, she came to my rescue, and we did play together when we were at home. But, day to day play was give or take.  That’s probably why I turned to wild life and animals for friends, and I liked dump trucks and backhoes. Most times it was a lot more fun than playing house with dolls, and a tea set.

I was somewhat of a tomboy with hair done up in French braids, and a turned up nose covered with freckles; tee-shirts, coveralls, and high top sneakers worn all summer long. My same age cousin Freddy and I played together with Tonka toy trucks. Our favorite spot to make roads, bridges and buildings was in the sand pit over the sewer tank on the side of my house. But that was even conditional.

I’d push my truck over his roads and he’d yell, “Make your own roads and stay off mine, or I won’t play with you anymore!” I won out every time. I’d just say, “But I like your roads better, Freddy, they’re straight and smooth, nothing like mine.” He’d smile and we’d continue playing.

There were special times when my sister and cousins, Freddy and Sonny hiked into the woods with me in search of wild adventure, looking for deer, moose, rabbits, squirrels and the like, with sandwiches in paper bags, and three German shepherd guard dogs, Ginny, and the cousins’ dogs Mitzy and Blackie. All the other fun times counted too, summers at Grandma Edna’s resort, Sunset Inn, on Kezar Lake or winters in the snow, and hoping for at least one blizzard that would close the three-room Annie Heald elementary school in town for weeks at a time. The four of us, close as brothers and sisters could ever be, were lucky. We grew up together for the first ten years of our lives.

Cousins are those childhood playmates who grow up to be forever friends. Cousins are a little bit of childhood that can never be lost. Our picture may fade, but our memories won’t. – Anonymous

Being the third girls left out some of the time gave me a clue that I had to make my own fun, and take care of myself to some degree.  So I followed paths alone, to the edge of the forest by the creek to find lady slipper flowers and frogs, into the barn with the chicken coup to take care of sick chickens, through dense pine woods next to our house in search of moose and deer, and up the hill in back of the barn to rescue stray cats and injured birds. All these outings were with my all-time protector Ginny, the family German shepherd dog.

Mom and Dad often wondered why I liked animals so much, friendly pets and wild ones, over dolls, tea parties and playing house. Even the stories that Mom read to me out of My Book House books had to be about animals, or had to have an animal somewhere in the story; at least a picture of a knight sitting on a horse, or the mention of rabbits, owls, cats or dogs, somewhere. Mom had just bought those books for us and I’d already stuck pieces of paper in pages of animal stories or pictures. It didn’t matter that the set of twelve books were for different ages and grades, starting with kindergarten nursery rhymes and ending with twelfth grade biographical sketches of famous authors like Browning, Longfellow, Shakespeare, and Tolstoy. Any one of the books with animal stories got tagged and I begged Mom to read them over and over to me. Last but not least was my most favorite book of all, Bambi. A Life in the Woods. Every time I saw a real Bambi with its mother on my forest adventures, I’d get excited and drag the book off the shelf for Mom to read to me, one more time. 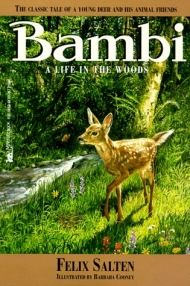 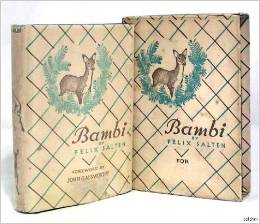 In 1928, Simon & Schuster published this first English edition under the title Bambi. A Life in the Woods.

It’s no surprise to anyone in my family or to the town’s folk of Lovell that I wanted to see the Bambi movie when it came to the Mayfair Theatre in Bridgeton, a neighboring town. I talked about it nonstop. Then I heard the news from Mr. Harmon at the grocery store down on Main Street that it was coming soon to the Mayfair. He heard it from his brother who lived in Bridgton. Good thing I switched and bought an ice cream cone there with my five cent allowance, instead of penny candy at Kimball’s general store nearby. I would’ve missed the big news, and the Bambi flyer he got just for us kids from his brother. He’d tacked it up on the Food Sales board at the front door.

Christine Elizabeth Robinson lives in southern California where the skies are sunny and the Pacific Ocean sparkles every day. Since 2013, she’s been a retired nurse practitioner turned writer, ever grateful for blog followers of her website, Before Sundown. In 2019, she started writing a historical fiction book, and by the summer of 2021 Three Years of Her Life is in the self-publishing process, nearly ready to launch. http://cerobinsonauthor.com
View all posts by C.E.Robinson →
This entry was posted in Happily Ever After, Happily Ever After - Back to the Beginning, My Blog, My Book, My Books, My Entries and tagged all-time protector, Bridgton, close cousins, Ginny German shepherd, growing up, Kezar Lake, love animals and books, Lovell, third girl left out, unique time, wild paths. Bookmark the permalink.