Elizabeth was six-years-old in 1945, the end of WWII.   When she was born on July 9th 1939, it was two months before the official start of WWII. That year the month of July sweltered with a 100-degree heat wave. The 649 townsfolk in Lovell, Maine were either home fanning themselves, or at work sweating profusely. Some women, kids in tow, braved the heat to do daily food shopping at the local grocery store down on Main Street. The Annie Heald schoolyard was empty. The chairs in front of the general store were empty. The men, “loafers” in the village, who gathered there to talk were inside cooling off under a huge ceiling fan.

The day Elizabeth was born, a mysterious cool breeze blew into town from the surrounding mountains. The temperature dropped 25 degrees.

The town’s psychic, Tess, proclaimed, “It happened because of the mystical superiority and luck of odd numbers in today’s date, 7, 9, 1939.”

Adeline didn’t believe in neighbor Tess’s psychic powers or numerology obsession. But the cool breeze connection to the date numbers gave her pause for thought on the comfortable fifteen-mile ride to Bridgton Hospital’s maternity ward. A few hours later lucky baby Elizabeth was born. Elizabeth was Adeline’s mother’s middle name. She chose it over her mother-in-law Edna’s mother’s middle name, Christine. She knew this would not set well with Edna.

Adeline confessed to Tess. “I’ve had my share of Edna’s wrath over the years. Elizabeth takes after my French/English side of the family. She doesn’t look German. Growing up, she’ll need plenty of luck to deal with her Grandmother Edna.”

Tess told Adeline the number 7 significance of the name Elizabeth. It meant an intuitive nature, inner guidance to gain goals, and a gift of words. Adeline was overjoyed, Elizabeth connected to her loving mother, a saint of a woman. She had no desire to know about Christine, associated with an opinionated, controlling, German mother-in-law. In good time Adeline would deal with Edna’s blunt questions about her name choice.

Elizabeth was seven-years-old before any reference to her name in numbers came up. Holding a stray cat in her arms, Elizabeth stood on the front steps of Tess’s house. She knocked on the door. Tess already had five cats, and she hoped the tabby wasn’t one of them.

She hugged the cat and whispered. “Please, please be mine.”

Tess opened the door, and peered down at her. Elizabeth looked up wide-eyed. “Is this your cat, Auntie Tess?” She called her aunt because that’s what kids called neighbor friends in this close-knit town.

Tess squinted through her glasses, and rubbed the cat’s head. “Could be the new one, Tiger. Well, he wandered off to your yard, so looks like he wants to live with you, if it’s okay with your mother. Besides the number 5 is an odd superior number. Tiger would make 6, and he’d have a little trouble adjusting in a group.”

Aunt Tess laughed. “Well, in numerology, all numbers mean something. For instance, your name Elizabeth magically adds up to number 7. Your birthdate is 7, 9, and 1,9,3,9. They are all odd, lucky numbers. You were born lucky, Elizabeth.

Elizabeth smirked. “The gypsy lady at the Fryeburg Fair saw a bicycle in her purple crystal ball. You mean that kind of luck?

Tess explained. “Something more important. In your life, you’ll be able to achieve your goals. You have the gift of creativity. You are the seeker, the thinker, and the searcher of Truth. Always trying to understand the underlying, hidden Truths.

Elizabeth sighed. “I was hoping for a bicycle.”

Tess laughed. “Go ask Mom if you can keep Tiger. Bet you’ll be lucky with that!

Elizabeth’s mother said yes, and she was busy taking care of Tiger. Unfortunately, it was less than a month before Tiger got sick and died of distemper.

A few months before in the winter, Elizabeth had rescued a half-frozen Persian cat from her sandbox. She named her Snowy, thawed her out next to the wood stove, and fed her warm milk with an eyedropper. Snowy wandered around the kitchen for three days before she dropped dead. It was suspected that Snowy was sick with distemper.

Elizabeth’s mother told her. “Count the months before you bring another stray cat home. You cut it short this time with Tiger. The vet said that it’s a full year before the distemper virus is out of the house.”

During Elizabeth’s younger life, WWII raged in Europe. Food rationing and blackouts had directly affected Elizabeth. She and her sister Jeanine each had four-ounce jars of sugar allotted each week. Their choice how to use it. It was hard at first, corn flakes and oatmeal without a sprinkle of sugar, but they saved it for mother’s baking jar. Chocolate chip cookies and donut holes were their favorites. The blackouts were emergency preparation if the war came to the US. Elizabeth hated hearing the air raid sirens. She grabbed her survival backpack, squeezed her eyes shut and waited for the all-clear signal. Her job was to pull up all the black window shades her parents had pulled down. Jeanine, sixteen-months-older, wasn’t affected by the sirens. She teased Elizabeth. “You’re just a big baby.”

A few years after the war ended, Elizabeth was still curious about Germany, America’s enemy during the war. Gathered around the RCA radio daily with her family, she’d listened to the war newscasts without understanding the complex details.   She wanted to know more about Germany because her last name Heim meant home in German. Elizabeth remembered what Auntie Tess told her. She was not only lucky, but the searcher of Truth, and underlying, hidden Truths. She was ready to chance her luck about those German books she found hidden in the attic.

Elizabeth lugged the box downstairs to the kitchen, and stacked the books on the table next to her father. He was reading the newspaper, and leveled a look at her.

She looked back and crossed her arms. “Will you teach me to speak German?”

“No!” He picked up the newspaper, rustled it, and kept reading.

Elizabeth was not one to give up easily. She had another question ready, and maybe she could sneak in a “why not” about the German.

Her father was a history buff, so she inquired, “What was the war about?”

He gave in and put the newspaper down. With hesitation, he sighed and gave her that look again. Elizabeth’s school writing tablet and pencil were next to the German books. He picked up the pencil and wrote his answer on the first page.

Read this and don’t ask me again! It will make more sense when you get older. The causes of WWII were widespread starting with Italian fascism in the 1920s, and included the political takeover in 1933 of Germany by Hitler and his Nazi party. The immediate cause was Britain and France declaring war on Germany after it invaded Poland in September 1939.

None of that made sense to Elizabeth. But, she had her father’s attention. “ What about our German name? Where did it come from?”

She wanted to know about her famous grandfather, Gustav F. Heim. She was sure he’d answer that one at length. A musician himself, he played the trombone in a local band. Elizabeth didn’t get very far with that question either. Her father’s answer was shorter than the war history.

His mouth set in a firm line; he took a breath and repeated his father’s last words. “No one should know about my life in Germany, that history dies with me.”

Elizabeth didn’t get the connection, but knew that was that and she’d better not ask why.

It wouldn’t do to approach her mother, busy cooking, sewing and cleaning. She’d say, “Go ask your father.”

Her mother was the only one of four siblings allowed to finish high school. She was considered the smart one, and had taken Home Economics classes. The others were sent out into the world to get jobs. 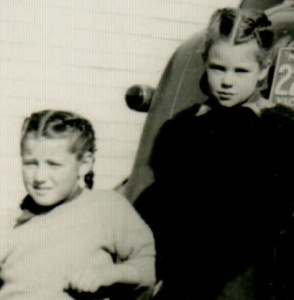 Elizabeth’s sister Jeanine wasn’t interested in war history, Germany or their German name. She’d be no help to push the questions. Elizabeth was the inquisitive thinker. With luck on her side, she was determined to uncover family stories, and underlying secrets even though that might get her into trouble.

I retired as a nurse practitioner in 2013, and became a full time novel writer. I added blogger in 2014 and created the blog site Before Sundown remember what made you smile. From the beginning, Before Sundown was honored with awards, and blog tours. I continue to be ever grateful, and appreciative of dedicated worldwide followers who like, comment, share and tweet posts. I started the blog to connect and support fellow bloggers, friends and family by writing blog posts about them--their books, interests, professions and travels. Overtime, I've added excerpts from WIPs as a co-author, and a final version (1/2020) of the first three pages of my book, Sunset Inn - wish you were here. Next, on to the publishing. The collections of sunsets/sunrises on the Welcome page came from bloggers all over the world. I wanted visitors to remember what made them smile Before Sundown. What better way than to offer them breathtaking sunsets or sunrises? http://cerobinsonauthor.com
View all posts by C.E.Robinson →
This entry was posted in My Blog, My Entries and tagged Chapter One, Curious about German name, Curious about Germany, Elizabeth born lucky, Needs luck to deal with grandmother, New Sunset Inn, Search for Truth, Underlying family secrets, WWII. Bookmark the permalink.

15 Responses to Sunset Inn – Chapter One